A few years ago, around the age of 18 i decided to do insanity workout with a friend, a friend who was extremely physically fit who just wanted to challenge himself. I always wanted to lose the weight and just needed a bit of a push. In fact it was me who asked him if he wanted to do Insanity, i was desperate and I knew doing it with a friend would motivate me to just do it.

60 days passed and I lost a TON of weight (not literally xD) I dont know exactly how much because i didnt have or use scales back then, but ill show you what I looked like (left) 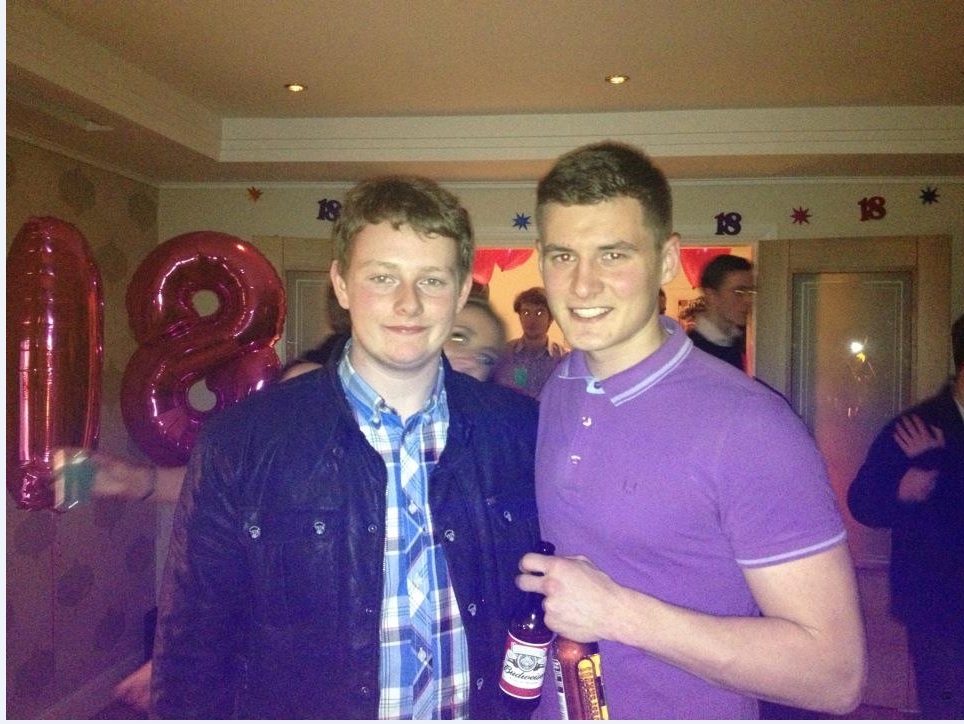 Sounds great right, well it was for a while, i was more confident than ever, happier than ever, my grades in school went up, it was great.

6 months later and i was 280lbs and remained that way for at least another year...

Fast forward. Here is a few pictures of me at my heaviest while on holiday in the U.S. 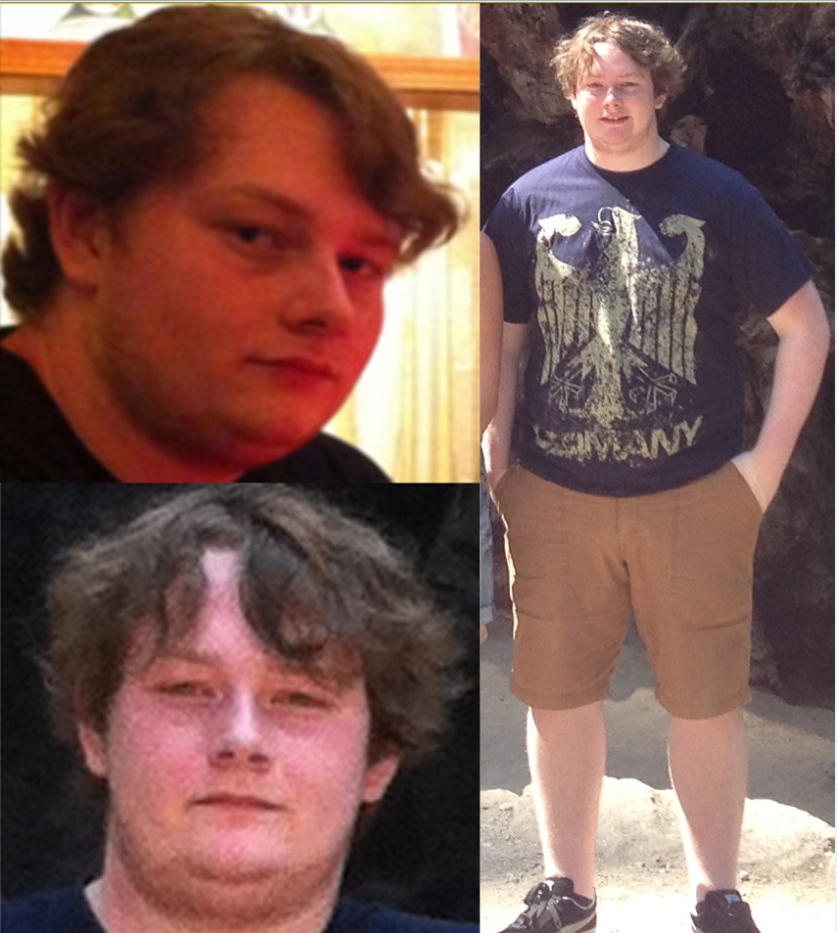 Yeah well fast forward another 8 months or so and i began my second weight loss journey, this was about a year ago now. I have a before picture that i took just before i started but ill post it with my current after picture at the end.

Anyway so my plan.

Exercise - Insanity workout - As much of the 60 days as I could, only being stopped by injury every now and then. I was also keeping an exercise diary of calories burned and duration etc that was roughly tracked through my Polar heart rate monitor

Diet - Tracking everything on MyFitnessPal, Not cutting anything out in full, just slowly tethering back on everything unhealthy, slowly cutting down on things.

I never once completely deprived myself of anything, i ate tons of chocolate and promised myself that every meal we ate out with the family, for birthdays for example, i could pick any main meal i wanted and i believe this is the way to succeed. Because i failed in the past, i learned that depriving myself and making drastic changes, while they may bring fast and extreme results over a few month period, they just arent sustainable, dont think your special either, most people do not have an iron willpower, unfortunately a lot of people think they will pull it off and they dont.

I'm not saying you cant, im saying be VERY careful as many dont, im sure you've read many stories of yo-yo dieters and the like, just know that taking it slow is the way to do it, and besides, 2lbs a week or 1% of your body weight is massive anyway, dont underestimate how big a 2lb chunk of fat is, problem is the 2lbs comes off across the whole body, not in a single place so its hard to see changes initially.

Anyway, again, fast forward until about January of this year. By January id had maybe 3-4 months off? No training, no dieting, just maintaining, and i was very happy to do that for a while. by this point i weighed exactly 220lbs, thats a 60lb weight loss from the start. I then got back on exercise, i completed about 55 days of insanity again, and then again I went back on a maintain figure and have been taking it easy since the end of Febuary. Since January and as of about 2 days ago, I lost another 20 lbs putting me at 199.5lbs as of 19/05/2016, making it an 80.5lb weight loss so far.

I still have a few pounds to go but im not sure how many, people in my family are telling me not to lose any more as ill begin to look too thin, i understand where they are coming from as clothed i do look quite thin but i know i have a few more lbs to loose, as you'll see at the end.

Anyway as you can see ive got my befores, from the start of my Insanity journey, and my afters from 1 week ago, big difference huh.

So yeah, few things really... Firstly! How many more pounds do YOU guys think i need to lose, now this is going to be vague, i dont want to be stupidly low body fat but would like to get some muscle definiton, so was thinking maybe another like 5-10 lbs, im not sure, we will see and ill be sure to post back here when i start to get RIPPED

And secondly, one of the things i had always intended on doing and in some way had motivated and continues to motivate me was being able to document all this to help others. I love helping people, im one of those people that my friends turn to for advice and motivation, or so they tell me Anyway i created a YouTube channel, im only extremely small and starting off with about 6 videos and 30 subscribers so far, but i love doing this because i want to try and help someone. If my videos change 1 persons life through my advice and tips, then its worth it.

I also know from my own experience that, weight loss is one of those subjects that clicks with people? This is hard to describe via text but im sure you'll know what i mean. You could hear 10 people say roughly the same thing, but one of them just clicks and you get it? something motivational for example, just the way someone says it makes you change, in that moment. Its hard to describe but i know that if i can do the same thing, make someone click and change, then its time well spent for me

Anyway ill end the essay here, be sure to tell me how much you think i have left to lose, really interested to hear what you think and if you have any questions on things ive done or anything really please do ask!

Ill put my channel down below here for anybody who would like to check it out or support it, i appreciate any views, likes, comments and subscriptions so so much

I look forward to seeing your messages!

Cheers guys!
Get Rid of this ad and join in on the conversation for free today! Tap here!

Anybody got any thoughts on how much left i have to lose or what anybody thinks of the video or channel??
S

Thank you so much for sharing your story, your before and after pics show such a difference!

I identify with what you say about at family meals etc picking the main course you want as before when I have deprived myself I fall badly off the wagon!

Not going to suggest how much weight you could lose now because I think you are probably the only person to make that call. Good luck with the next part of your journey!

looking at your pics i'm not sure you need to lose any more. if you are continuing to do insanity then you should build muscle mass and you will probably get heavier, but in a way you like i think it may be time to shift your focus to toning and muscle if it's ripped you're after, but as has already been said, only you can decide on that. you're looking great, have achieved incredible things. congratulations. looking forward to hearing what you decide

S: 15st10lb C: 13st1lb G: 9st6lb BMI: 33.5 Loss: 2st9lb(16.82%)
What a transformation and what a lot of hard work. Congratulations on your determination because it has really paid off . I don't think you should worry about losing more weight, just concentrate on maintaining the weight and keeping a healthy lifestyle. If you continue the workouts you will be building muscle and that weighs more. You can tell it is muscle because it will feel firmer and your muscles will be more defined, so don't worry if the extra muscle nudges you up on the scales.
Last edited: 29 June 2016
Staying healthy and helping prevent future diseases by a lifestyle change. Stand away from the cake!

S: 14st7lb C: 14st7lb G: 9st7lb BMI: 32.8 Loss: 0st0lb(0%)
Wow, amazing! Thanks for sharing I really need some inspiration right now as it feels so impossible so really appreciate sharing your experience. You've done amazingly and must feel so great! I hope I get to post in here one day.
R

HI! I am Ria and I am new here! Your story is very inspirational. I am struggling to lose weight. I started diet and going to the gym for almost two weeks now and not a single pound is gone. I am frustrated but I keep pushing myself. But your story makes me believe I can accomplish my goal.

RiaDali said:
HI! I am Ria and I am new here! Your story is very inspirational. I am struggling to lose weight. I started diet and going to the gym for almost two weeks now and not a single pound is gone. I am frustrated but I keep pushing myself. But your story makes me believe I can accomplish my goal.
Click to expand...

Hello Ria, are you drinking plenty of water? That can help. Also keep food and drink diary so you know exactly what you have eaten. Exercising is great for toning and combined with the diet you will lose weight. If it is any consolation, muscle weighs heavier than fat.
Staying healthy and helping prevent future diseases by a lifestyle change. Stand away from the cake!

Hi I'm Neri and I lost 10 kg recently and it was almost enough for me I've lost my weight with exercises and right nutrition, but now I've started to gain weight again so I need support..

My Diary: https://www.minimins.com/threads/msmoos-weight-loss-diary.356017/
You must log in or register to reply here.

B
Mommy fitness struggles and success!

2 August 2022
Moonagedaydream
M
B
After losing 10st and putting it back on I'm back to losing weight again.