My sister sent me a pic of me I hadn't seen before and someone at park run took a photo of me on Saturday. 3 more weigh in's and my first year on Slimming World is complete. 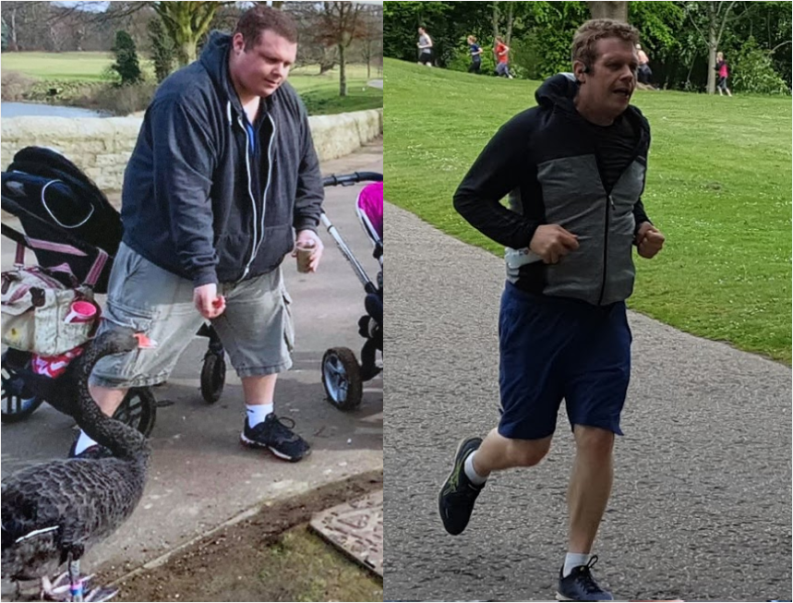 One thing I will make sure is I don't feast on a cricket tea today like I have in the past two weeks and seen an instant gain and hopefully I won't overdo the indoor cycling like I did Wednesday when I spent 2 hours climbing a mountain in the Alps which is famous for being part of the tour de france! It killed me, I felt sick after, turns out I was ill anyway as we all had gastroenteritis but my cycling plus lack of food saw me pass out and have really bad dizzy spells.
R

But this marks my 1 year of Slimming World. In 1 year I've managed to lose 12st 11.5lbs! I have stuck a post on facebook and instagram tagging in slimming world. I think I've set my target weight to 13st 7lbs so just under a stone to go now. I'm getting to the stage where I'm feeling pretty good with my weight and how I feel so that last kick to get me to the healthy BMI and losing half my original weight and start to focus on the maintaining or building my fitness levels.

S: 19st9.5lb C: 18st9lb G: 16st0lb BMI: 35.4 Loss: 1st0.5lb(5.26%)
wow amazing work Burt... loving the man cave btw, how is zwift, worth it? As well as joining SW I've been training for a sportive (Dartmoor Classic) which I've really been enjoying, out riding around, no thrill like it. Anyway, amazing journey you've been on, the ups and downs... you should be really proud of yourself. Inspiration for me anyway!

Brilliant, you are doing a fantastic job for you and the family. 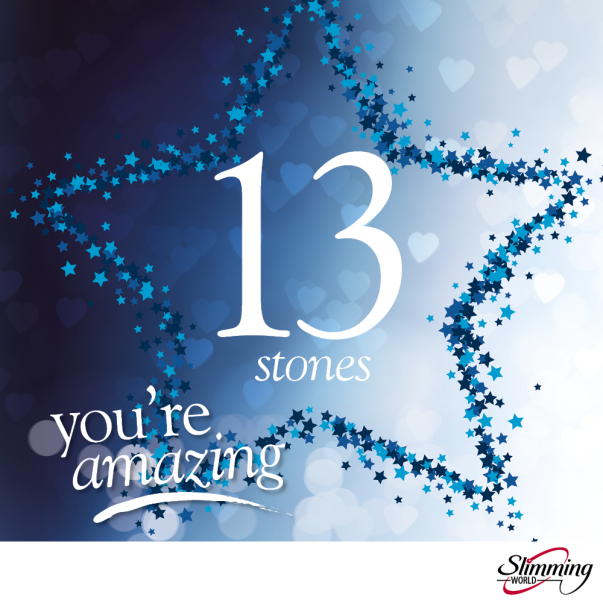 kaferboy said:
wow amazing work Burt... loving the man cave btw, how is zwift, worth it? As well as joining SW I've been training for a sportive (Dartmoor Classic) which I've really been enjoying, out riding around, no thrill like it. Anyway, amazing journey you've been on, the ups and downs... you should be really proud of yourself. Inspiration for me anyway!
Click to expand...

Sorry for the late reply.

Zwift is good but I'm probably not utilising it well. I join a lot of group events and ride with 50-800 others where we use each other to group up and draft. I've been using a lot of these to do say 20miles in an hour session on relatively flat courses. This week I've taken on a couple of different groups which have pushed me hard. One a 4 lap higher power push with 4 x sprints included and 4 x climbs, I was sweating buckets! The other was a 90 min endurance booster. There are also workout programs built in but these try and get you to do 5-7 days of continous workouts for a few weeks and I can't really commit to it with the kids and work. I've got 2 weeks off work soon so I might try a 2 week program.

But yeah, Zwift is pretty decent. It is helping me a lot with my fitness and the gaming aspect and community (I'm part of a team now and join 2 other teams rides and chat with a lot of people on there) is amazing. The initial setup cost for the turbo etc is a lot though.

Good luck with the Dartmoor Classic! How many miles are you doing on it?

How have you stayed motivated and did you ever think you would be able to do it?
I eat to live not live to eat.I do have the odd slip up.

Remove the barriers from your mind, overcome the excuses holding you back and go and achieve your goals in 2020.

craftermary said:
13 stone off is amazing.

How have you stayed motivated and did you ever think you would be able to do it?
Click to expand...

Honestly, no I didn't think I'd be able to do it. I have tried a few things in the past half hearted and given up early even when I've lost a little weight.

I think the difference this time has been a few things...

1) My competitive nature. It was the passing of my father in law which pushed me to join as he said he wanted me and the two brother in laws to join so there was a kind of competitive thing to lose more than them, neither of them have got into it though although one looks like he's doing a lot better than the other!

2) Spending money. Knowing I've invested quite heavily into it I feel I need to justify it. SW isn't cheap for what is effectively just a platform where I log my weight online (still annoyed I paid so far in advance for it as it's rubbish for online people!). The bikes, bike setup and various equipment have cost me a small fortune and I need to justify them!

3) The biggest motivation of them all, my family.

At 27 stone and unable to walk up a flight of stairs 12 months ago, I wasn't in a good position! I set the small personal goals of losing weight and being healthy enough to play football in the park with my son when he's older and go on bike rides with the family when they're ready. The aim was to be ready to do this in a couple of years time.
M

S: 13st4.5lb C: 12st13lb G: 10st0lb BMI: 33.1 Loss: 0st5.5lb(2.95%)
I remember reading a few of your first posts and have come back and forth to see your progress, wow, just wow, what an achievement, you and your family must be so proud!!! You have shown that anything is possible with hard work and the right mindset. Congratulations

kaferboy said:
Hi Bert, thanks for the info on the zwift. I'm doing the medio course of the Dartmoor CLassic which is 109km, so 67 and a bit miles. I've been training on the course because it's my local stomping ground and there's so many hills haha it's a killer.
Click to expand...

Good luck with that!

The most I've cycled is 35 miles in 90mins but I know I have a lot more in me, I just can't find the time with the kids and the one time I did have it in me to do more I was 5mins from home and needed the toilet and decided to stop completely.

I have said I want to do a 100km ride in the next 12 months, I might have to invest in a better saddle for my indoor bike if I'm going to do it on zwift though.

The good thing about zwift is you can do training on the hill climbs. I did our local hilly route and it killed me. 2 months on zwift and a few hills on routes on there (and a mountain) and when I hit the hilly route again it didn't feel like much of a slope to be honest! This is the one that hurt me the most although looking at the stats it's not the one I've put the most effort in by far.... 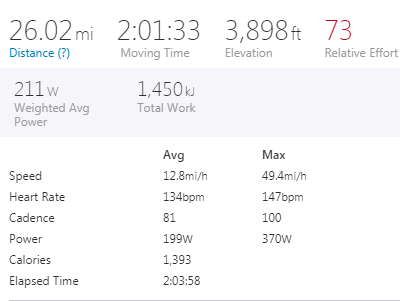 It's the zwift replica of cycling the Alpe d'Huez.

Good luck with the ride though, are you doing it as part of a group? I almost signed up to a local similar one and they had a lot of warm up rides from my area and they all rode the route together and helped each other with punctures etc and stopped together. One day I might grow some and do one of these rides, cycling is great fun and the community who do these rides seem decent. I am however enjoying the online community a lot and find myself doing online group rides with the same group of people quite often.

In just over a yea I have hit my original target of losing 13st 1lb and hitting the 14st mark.

It felt great to see the 13st on the scales. I would like to try and hit 13st 7lb to be in the healthy range of BMI and also half my original weight but I'm now starting to see the struggles of weight loss a bit and also have been told by a few people I should probably stop. My issue area is now my gut which I'm not sure if it's fat or a mixture of loose skin and fat. I'm thinking I really need to change my exercise plan and to start incorporating the abdominal exercises to try and concentrate on the area. I'm not convinced it's going to help too much but what I do know is whenever I've been losing weight the areas it's showing most on are my face, forearms and shins, if I lost much more weight on these areas I think I'd be verging on looking ill.

Onto some more positives. Saturday my parents are renewing their vows. It's the first time I've seen most of my relatives for well over a year and for most I was at or over 27 stone when I saw them last. Most (I'm not sure all) know about my weight loss and have seen pictures but it's a bit different to seeing it! I have people I work with who have been blanking me at work as they don't recognise me, I'm looking forward to seeing people for the first time since losing the weight! I've also got a bloody nice suit to wear, the last suit I wore me and my wife both fit in together now with plenty of space still free and I couldn't do the buttons up on that because I was too big for it!
R 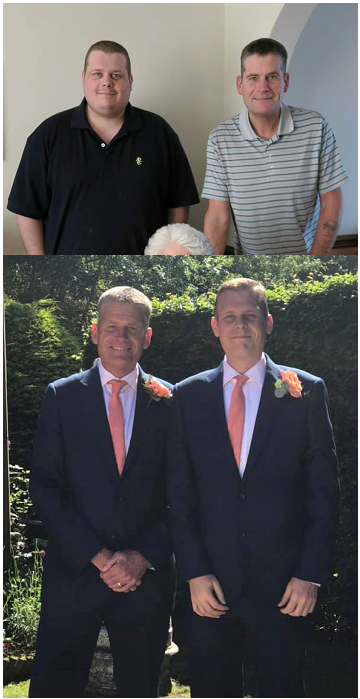 J
How many syns in nissin soba teriyaki noodles