S: 380lb C: 286lb G: 190lb BMI: 37.9 Loss: 94lb(24.74%)
Hello guys! I am starting a new weight loss journey. Unfortunately over the past few years I've got bigger than ever, 382lb. I think there are certain factors that will now give me an easier time. I have taken an interest in the zero-carb carnivore diet because I love meat and know that keto did work for me in the past. My goal is for it to become a complete lifestyle change rather than just a diet. I tried keto two times and it was great while it lasted. The first time it lasted until a lengthy hospitalisation (no way to be carb-free) and the second time I went on a holiday which in retrospect wasn't a good idea. I tried Lipotrim which led to a good loss, but I hated every single day of it so it was unrealistic.

I also think that using a timeframe for a whopping loss of 200lb is very unrealistic. Getting this way took many years. I won't be able to undo that quickly and don't know for sure how long it will take. For ten years, 2009 to 2019, I was suffering from epilepsy. Fortunately, in May 2019 I got brain surgery which has caused me to have zero seizures in the last six months, whereas beforehand I was having them every day. The change to my mental wellbeing will no doubt boost my focus and determination. I have been preparing for the diet by buying a good grill and a new set of tools for the kitchen.

I've been easing myself onto carnivore by gradually altering my carb and protein/fat intake. This is to avoid the dreaded "keto flu" (which might still happen but we'll see) and it could take another week until I'm in ketosis, so I'm not expecting much from the week two result, if anything. I will mostly eat steak, particularly rib-eye and some sirloin. I'll have mincemeat from time to time as well as salmon and egg yolks. I'm considering introducing organ meat like heart and liver. Back when I did keto in the past I had grass-fed beef. Some say it's far better for weight loss, but others say there isn't a big difference. I'll save money with supermarket meat, so for now I'm seeing how it goes with the economic option.

I'm planning to get a heavy-duty treadmill in the next month or two and spend an hour or (hopefully) two on it daily. It's expensive, so I can't go for the more expensive meat as well. I'll be taking a photo of my current weight in the next few days. I might not post it yet but I'll definitely keep it handy for comparison photos to use further down the line. I got a look at how my progression could be from using the Model My Diet website. I've divided my weight loss into milestones: 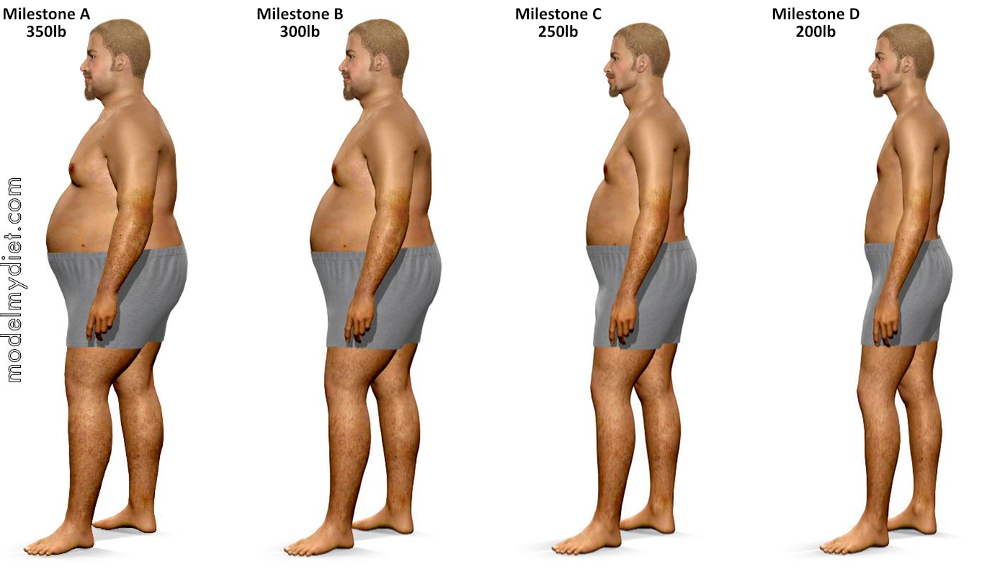 I hope to perhaps go from 200lb to 180lb by the end (which would be that 200lb loss) but I decided to just have four milestones. Ten years ago I weighed about 220lb and I thought I was really heavy. I guess I was naïve. I'm looking forward to eventually beating that 2010 weight. You can see my progress in my signature with the ticker, but I'll report my losses here too. Today I'll eat a steak, one or two burgers (meat only) and my final carb food left: a pack of noodles. Tomorrow and Thursday I'll finish my fruit juices and then finally be completely on carnivore on Friday. I will be having 12-hour fasts. From Friday I'll also start tracking my calorie intake. As long as I feel satiated (one of the main guidelines for carnivore) it's fine but I'll avoid having more than 2000 calories a day. I will probably increase that limit once I get the treadmill.

S: 380lb C: 286lb G: 190lb BMI: 37.9 Loss: 94lb(24.74%)
I decided to do my weigh-in the night before. To be honest I've not had a great past week and I wanted some encouragement. While my wellbeing hasn't been great I did stay true to my diet... mostly. Once I'd finished my few remaining carb foods and fruit juice I strictly stuck to eating only animal products. On a couple of days I have undereaten. Bad days. Overall I've felt satiated enough from the switch to carnivore for those moments of negligence to not hit me hard. I've also not been completely strict about how I managed my food. All animal products but inconsistent. I hope to better organise what I'll eat throughout the next week.

With all that out of the way, onto the important part... the good news!

S: 380lb C: 286lb G: 190lb BMI: 37.9 Loss: 94lb(24.74%)
Oh dear, a gain of a pound. With the initial 10lb loss (a lot water weight I suppose) I'm not going to complain too much. However, I do need to be stricter. On a few occasions I've done things I probably shouldn't have. On a couple of days I forgot to move steaks for defrosting. Sometimes I just grabbed a chunk of cheese and had that instead. Eating cheese is encouraged because it's advised to have more fat that protein, but I didn't control the amount of cheese I had and could well have had too many calories on some days. For the next seven days I'm going to introduce extra rules. I will have steak twice on five of the days. On the other two I'll have steak as one of the meals and can choose a different for the other. Could be salmon, or other meat/fish. As for cheese, I usually top the steaks with it to get a decent amount.

I think right now this is about trial and error. If it doesn't make a difference I'll introduce calorie counting. The reason I haven't done that already is that most zero-carbers say it isn't needed or even recommended. Let's just see how this goes...


ladybird777 said:
Carnivore diet can be very hard on your kidneys. Good luck with it all.
Click to expand...

Thank you. I've heard that one before. I've also heard it's a myth. An opinion from a doctor.

B
After losing 10st and putting it back on I'm back to losing weight again.

Christmas Challenge: Maintain (or Lose) over the Holiday