S: 13st9lb C: 12st5lb G: 11st0lb Loss: 1st4lb(9.42%)
aw fab @GLL perfect! if you want anything made to a particular size let me know, it's pretty easy to size up and down. Thanks so much for ordering
Get Rid of this ad and join in on the conversation for free today! Tap here!
first target takes me beyond obese and just 'overweight'

S: 13st9lb C: 12st5lb G: 11st0lb Loss: 1st4lb(9.42%)
I have no idea what day I'm on... lost count so I'll need to go back a couple days and count lol. I've not weighed, after being a bit off plan most of the week, taking the whole weekend off AND I'm menstruating again. I miss the days when my cycle would disappear for months lol. PCOS has obviously improved over the years and now that I don't really need em my ovaries work better lol.

I also had the worst sleep I've had in a long while, think I only had a couple hours last night so I'll be napping later.

I'll get back onto the wagon today and hopefully show at least something off next week and I'm pondering 2 packs with a 400 calorie meal for the days when I'm feeling like I wanna munch. perhaps that would work out. I would also end up lower carb, as the packs are all about 13-15g carbs, when I'm not being stupid my meals are less than that.

last weigh in was 173lbs. My year lowest was 171. my target of 154 is clearly distant, even on vlcd. So I am reconsidering and thinking as long as I'm lower than 171 when the year ends I'll be happy enough so have had actual forward motion, but would be awesome to be in the 11's, which is only 6lb's away, and there are 6 weeks... so 167 or less would be great but as long as I'm 170 or lower I'll take the fact I'm healthier than I was at the start of this year and stroll forwards.

The heaviest I've been is around 200lbs. I like to remember that because I've been there twice and although I've come closer to it I've not gone back there exactly now for years.

I'm pretty sure I started this year at about 191 (there was a wonky scales incident).

I'm 173 now, that's an achievement I think, even if it's been slow and segmented. They say the secret to life is to fall 7 times and get up 8. pretty sure I've fallen more than 7 lol.

the further away ones seem so distant, but every pound we lose we are healthier than we were.

enough rambling, catch you all later !
first target takes me beyond obese and just 'overweight'

My goal is 154 ish too to start, that puts me at the top end of healthy bmi. When I am closer I will decide how much more I want to loose. Still, for me it is 50-60lbs away so plenty of time to work it out

Don't sweat the weigh ins, get your head in the game an keep on going x

I haven't time for a proper catch up, Tuesdays are busy, back later on!

well I dunno @GLL my losses are soooo slow as it is haha.

Ah well most of the time I'm at peace with it, this is the body I 'have' after all and I've no choice of another so I best get on with it. The journey to self acceptance and all that.

I'm getting totally bored of the exante FB page, and may well just remove myself. There are many good supportive posts don't get me wrong, but having lost 6lbs in a month I'm really past caring about the 'I lost 9lbs in week one and only 3 on week 2 I'm soooo disappointed' type posts. I'm don't respond but I want to say 'really? get over yourself' lol. Uncharacteristic lack of empathy. It's also full of foot stamping 'my delivery was damaged' despite repeated advice to contact exante directly, as the FB can't do anything. Other random stuff I can't be bothered with. It's tricky.

In general I remove myself from that type of stuff, but as I said there are some good supportive posts as well, off course I scroll on by but you can't unsee the rubbish. I'm lacking patience this week lol.

Well yesterday went pretty well, I had a good tidy up and missed tai chi (I really need to do my tidy up on Mondays) then had a shower and then had 3 ladies in learning how to make dream catchers. I spent a bit of time wrapping 5 rings later in the day to make a batch to sell.

I'm chilling this morning watching a movie (called shelter) it's a psychological thriller with a touch of supernatural craziness. Then I need to pop to the post office, take my dog for a nice walk and back in time for son from school. He's going with his Dad at 5pm tho and I've got work at 9pm. Sooo I'll be getting busy in about 20 mins!

toodles
first target takes me beyond obese and just 'overweight'

S: 16st2lb C: 14st5lb G: 11st6lb BMI: 32.4 Loss: 1st11lb(11.06%)
I joined a keto fb post the other day and about to leave it too.
Again, some great support posts but admins posting fake "I lost x lbs by my birthday using <insert link> custom keto plan...of course it is paid.
yup...screw that. Not into folks who make a group just to make money with the same info you can find online. no backup of why their science is correct either, they just point people to youtube videos that aren't about their version of the plan at all. Like eff this.
:')

Have a great afternoon and hope work is smooth sailing. Ding my fb is you are about run out of patience and to slap stoopid people

More hugs to ya x

S: 88.7kg C: 78.2kg G: 68kg BMI: 34.3 Loss: 10.5kg(11.86%)
Hi Chilli, it's taken me a long read to catch up with all of your posts, you HAVE been busy. Don't know if I said before but I had a craft business a number of years ago. I did have an Etsy shop but found it took more time working the shop with networking and marketing than it took making items to sell. So I just let it lapse. I found craft fairs and markets to be the best way to sell. I've given it up now that I am in the world of full time work but still like making things and love Christmas cos it gives me an excuse to craft my heart away.

S: 13st9lb C: 12st5lb G: 11st0lb Loss: 1st4lb(9.42%)
Hi @tipperary welcome back! yeah even facebook takes a lot of time and I don't commit enough to it, but I like making stuff to my own timescale and on my own terms, so I'll build slowly. I may do craft and christmas fayres once my son is old enough to either come to a venue but wander and do his own thing, or stay home alone. I think it's not really fair to bring him to an event and expect him to sit the whole time and behave. So for the moment it's online and doing my groups and workshops at home.

I've a bunch of dreamcatchers to add feathers to, so I'm passing through today but thought I best drop in and admit I've been struggling to stay on track this week. I think I'll definitely start having 2 exantes and a 400cal meal going forwards and hope it helps me balance out.

no idea what day I'm on haha

back later.
first target takes me beyond obese and just 'overweight'

ChilliQueen said:
no idea what day I'm on haha
Click to expand...

singing my song there

S: 13st9lb C: 12st5lb G: 11st0lb Loss: 1st4lb(9.42%)
I'm kind of half in half out this week until I can top up my shopping. I hate shopping so I only go once a week lol. The other option is I may just go back to BSD and intermittent fasting. I think that's what I've done best on in the past and just use my packs 1 a day. I did exante hoping for a quick boost before the end of the year, but even when I was 100% it wasn't giving me that really. Not comparably.

I managed to get dreamcatchers finished (video on my social media for those who like a lookie) I keep not having time for my tai chi classes Although if I get my finger out perhaps...I have my art group this afternoon and the craft room is still a mess. My creative process is... well... crazy. So I guess what I need is 2 craft rooms lol one for groups and one for working (not gonna happen haha)

Today I need to get the dreamcatchers listed for selling, post on the 'tuesday' selling pages (I've a list to post on several different days) clear the room and decide what we're going to make in group this afternoon, tai chi maybe, nip to the shop for biscuits, group at 1300. Later on make a poster for a dream catcher workshop, and do a mini stock take of my dream catcher supplies in case I end up running said workshops... And I need to start THIS weeks collection - festive facemasks, dog collar and hair bows.

But it's ok, I've no big plans rest of week so I can make make make. I wish Tai chi was wednesday. Anyway I'm just sat with my morning cuppa tea, I'll see if I can kick myself into gear soon.

Another thing I'd like to get to, that my mother in law suggested is arm/wrist warmers with thumb holes. She sent a pic of some funky ones.

Anyhoo. Bye for now
first target takes me beyond obese and just 'overweight'

I still haven't made masks or bows, got distracted by an urge to embroider on my denim jacket! I'll attach a pic I LOVE how it turned out.

Weighed this morning and still the same but I've not been paying much attention so I'm happy with that. I'm taking daughter to lunch on Friday, and have a meal out with friends on Saturday, so I'm thinking try to be serious from Monday. 2 packs and a low carb meal, or more loosely BSD and use the packs up as I go. 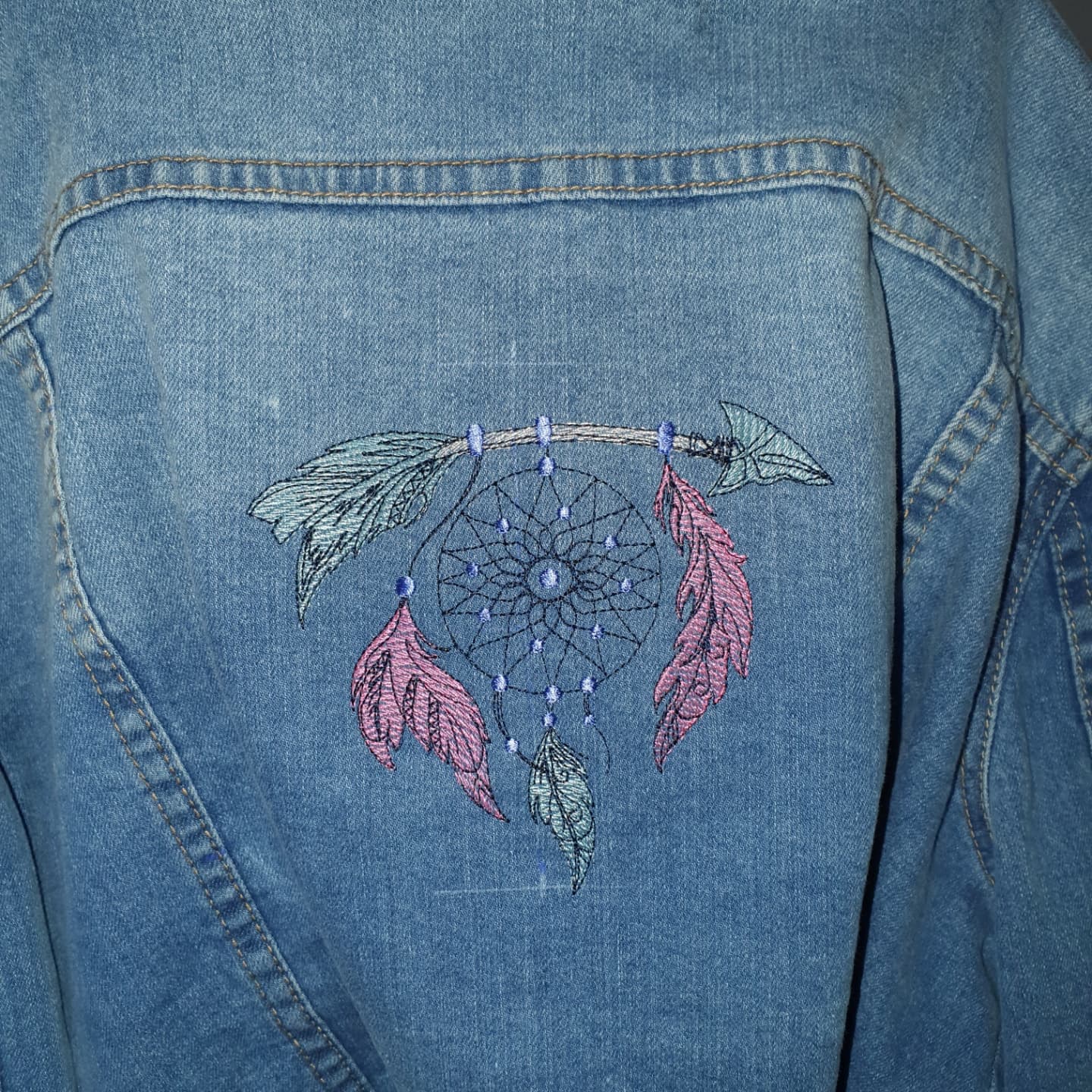 first target takes me beyond obese and just 'overweight'

The jacket is lovely! Such a talented lady

Where you heading for foods? I do love my wee lunch dates with my daughter. We don't do them often enough.

T
I think I need help.