I'm currently on 7 & feeling great, don't own scales so just basing it on how I'm feeling!

I find I can lose no more than 6 or 7lbs a month on SW and WW....and that is if I'm lucky. Plus, it makes me OBSESS about food till it makes me miserable, cheat and ultimately fail. However, both are good plans. SW made me a healthier cook and WW is easier to fit round normal life. I will loosely follow WW when I get to a suitable weight again. Just my opinion though. X

S: 15st9lb C: 14st0lb G: 11st0lb BMI: 34.7 Loss: 1st9lb(10.5%)
Hi,lost a stone in 2weeks doing cambridge but was expensive and didnt like the packs,so I switched to s&s, I prefer the packs and it's a bit cheaper, I haven't lost big amounts on this , I'm halfway through week 2 and I've lost approx 4lbs,but for me it takes away the opportunity to over eat or eat loads of carbs,sugary food. I do have a protein meal as this is my saviour,actual food which is filling and healthy , also I know i would spend at least 30pound a week on healthy foods I.e weight watchers products,plus slimming group weekly fees, I like the strictness of this yet variety of products and protein options, once you buy products you can't return therefore I won't throw money down the drain and cheat,however at slimming clubs if I cheated and went off plan I just wouldn't go back! So after weighing all this up (no pun intended) I stuck to this and I'm feeling good,skin clearer and feeling in control for the first time ever,plus no dragging my poor children out in evenings to go to my weigh ins ! Whatever you decided I wish you good luck x
back again but this time no fads!

Yeh no I agree with the fast weight loss with vlcd & am sticking with s&s, just when I think about food I often think to myself id rather do SW. But it's like I'm just giving myself excuses to give in & eat.

I can cope without the food as I am making a mental note of what I fancy so I can have a small portion of it when I return to food. I am learning patience cos I know I can have whatever it is eventually! Plus, I will admit to having poked the end of my little finger into my dh's food if it is something really mouth watering and that has satisfied me (other people take a good sniff instead).

S: 14st3.5lb C: 13st5.8lb G: 10st0lb BMI: 31.2 Loss: 0st11.7lb(5.86%)
I find with the likes of SW I am so motivated to do it the first few weeks then I get very lazy and can't be bothered to constantly cook and prepare food for every meal and start slipping. VLCD's are a bit of a no brainer for me as I don't even have to think about it. As you can tell I'm a lazy sod haha! Also on slimming world my losses were extremely slow. Maybe 1lb a week? 2 if I was extremely lucky...

Anyway my point is some people can lose 3-4 lbs a week but not most. Most people will lose 1/2 to 1lb after being really good all week and they are happy with this

I really struggle to lose anything on SW. I went for 9 months last year and lost 1.5 stone and it was a hard slog to lose that

I have lost 3 stone 1 lb in 17 weeks on s&s and still feel really motivated.

At the end of the day you just have to do what us right for you
[SIGPIC][/SIGPIC]Starting weight 16st 2.25lb :wave_cry:

Personally I think it very much depends how you found yourself needing/wanting to lose weight. A lot of people get to that point because they eat too much/move too little and don't know what to do about it. Some wouldn't know healthy food if it came and slapped them in the face, some think a Greggs chicken pasty is healthy cause they've heard white meat is better than read meat. Plans that specifically show people how to cut down calories, make healthier food and cooking choices and have an element of control are all they need and they will do very well on them - without a doubt all slimming club based plans have successes, they wouldn't be able to keep going if they didn't, and they wouldn't have many people queuing to be in their magazines every month.

But, there are also the element of people out there (and I'm beginning to think we could be a majority!) who could start their own wikipedia on eating plans, having done them all, bought the cookbooks, lost the weight, but not kept it off after "coming off" and are then baffled as to what's going on. These are the people (me) who just can't stop eating - and this is where they need the help. They know what low gi is, they can catogorise green and red foods with their eyes closed, they know how many points are in a tin of baked beans. This, I believe, is where the limitations of these slimming club plans is most evident - they don't know what to do with these people. The cynical amongst us may suggest they do know what to do with them, but these people are their backbone that keeps their company going by turning up week after week after week - but that's just an opinion eh?

So, for people like me - yes, S&S is totally worth it. I spend considerably less on this than I did on my weekly food shop, I'm losing a great deal more weight than any other plan, and the time out from eating "food" is allowing me to examine the why. I sincerely hope this is my last time losing weight, this plan feels very very different and gives me the confidence to think it might just be the last time. Not having to think about points and choices and exercise is giving me the time to recognise my eating is so much more about my head than about my body - and that to me is the absolute key difference. 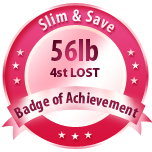 S: 18st12lb C: 18st0lb G: 11st2lb BMI: 36.2 Loss: 0st12lb(4.55%)
I've tried & failed every diet I've ever been on because I get obsessed about red/green days, points etc etc. trying to justify having a large plate of potato wedges & beans at 9pm at nite because its 'free'. So far I'm loving s&s because I know I have 4 packs a day & that's that. I do believe tho that all these diets/food plans work it just depends on what works for u. At the end of the day eat less & move more.

S: 17st9lb C: 17st0.1lb G: 12st2lb BMI: 36.2 Loss: 0st9lb(3.62%)
For me, plans like Slimming World and Weight Watchers have always failed to give me much in terms of results, 1/2 or 3/4 a week, my losses were very rarely above a 1lb and until CD, I worked only in kg as well, so it seemed a teeny tiny amount for how hard I'd been trying.
Also, like others have said it forces me to focus on food, which I do more than well enough on my own. I also became obsessed with what was 'free' so still over-ate and I felt it did not teach me healthy habits, as I've never had a 'bad' diet, I just eat far too much.

Mini Goals
Lose half a stone
Lose my first stone
Club 10 (15st 8lbs)
Get into the overweight bmi (14st exactly)
Get to my previous lowest weight of 13st 12lbs
Get down to 12st 0lbs
Feel good in my body!

I'd be amazed if anyone 'can easily' lose 3 or 4lbs a week every week on SW, sounds like she's either over estimating or trying to sabotage you. Have her put her money where her mouth is and do your respective diets for a month see how much she loses

S: 14st7lb G: 9st12lb
my mum was saying similar things to me when I was doing LL especially the weeks I came home with a 2lb loss.. but I still lost a stone a month on average. And so I listened, tried WW, lost 3lbs in week 1 and gained 4lbs week 2.. lost that back off, plus 1lb the 3rd week.. then gave up.
I find counting everything so tedious! oh eat lots of fruit.. all I can think is how carby fruit is! low fat this low fat that, bleurgh, fat is not bad! sugar is bad!
sorry just my opinions..

I read there are two types of diet, ones that allow you to eat anything as long as its counted, or ones where you eat certain things, eg. food sachets. I think the diff types suit diff people.

Hmm that is what the sabotage in me keeps saying 'you could be eating 'real' food and still loosing weight! But tbh on a standard diet id still binge so wouldn't!!
A bit if a random question for this thread but are you aloud menthol and eucalyptus tea the only ingredients are spearmint and eucalyptus? Might help with my belly as it feels really bloated today
I

Yer that's what I thought! Tbh think I'm guna have to chance it cause my belly is bad thanks though

After coming to terms with my 6lb loss a friend just put her status saying she lost 8lb on Ww grrrrr i have only been drinking 1.5l (at a min) of water a day can't drink any more as have pain in my lower AB but got a funny feeling I may have a bladder infection... Would that effect my losses? X

Desperate!!! said:
After coming to terms with my 6lb loss a friend just put her status saying she lost 8lb on Ww grrrrr i have only been drinking 1.5l (at a min) of water a day can't drink any more as have pain in my lower AB but got a funny feeling I may have a bladder infection... Would that effect my losses? X
Click to expand...

If this is your friend's first week on WW her 8lbs is a loss of water. If it is not her first week then she is speaking utter nonsense (I nearly said the sh word). I have never been to a slimming class, scottish slimmers, ww, rosemary con, where someone has lost more than a lb or 2 weekly except in their first week.

Personally I would take no notice of her losses and don't tell her yours. Sounds like she is trying to want to put you off your choice of diet. You stick to your guns.

On the water front, up the water you use for your shakes as this counts towards your fluid intake too.

One of my friends has constant UTI's and doc tells her to drink plenty of water to flush it out.

Your 6lb weight loss in realistic terms is 3 weeks at a slimming class @ £4 odd a week, not to mention the food you have had to buy, also the diet books they force on to you. Your body is lighter but your purse is heavier in comparison.

Week 5: Going to be an off plan week, sons 18th birthday lunch, in laws over sons birthday meal retirement night out on Saturday back on plan Sunday. 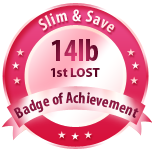 Started S&S - Moving over from Cambridge - Is there anybody out there?

Dreamingmaid's Stop Feeling Sorry For Yourself And Do Something About It Diary!