I have 58lbs to lose and am hoping to be well on my way by the end of March so I can start looking at wedding dresses.

has anybody got any advice on when I have to start looking for my wedding dress - I have been to one bridal store and after trying on 3 dresses walked out as I didn't want to see what they looked like on me until I was happier with my weight. I also refused to try on the plus sized dresses

Also is anyone else in a similar position and want to keep in touch?
Get Rid of this ad and join in on the conversation for free today! Tap here!
[url=http://www.TickerFactory.com/weight-loss/wPc5fX7/]

Kind of - I'm not getting hitched though, but I am cheif bridesmaid. I've got 50odd lbs to loose and I've ordered a dress in a size 16 - which I absolutely have to make. The pressure is on!

The wedding is in June. Have a look online at frocks - the Alfred Angelo collection is stunning.
Updated ticker for restart...

Hello & massive congratulations on getting engaged.

I got married in August 2008 at Edinburgh Zoo.

I started losing weight in November 2007 with Cambridge as we had our wedding booked and I was determined not to be fat. By Christmas I was at my slimmest (about 10st 7lbs) which sounds a lot but I must be muscley or something as I fitted in a (UK) size 10 dress.
Dress shopping was horrible as a 'fat' person. At my biggest I was only a small size 16 but the women treated me like the biggest, ugliest thing they'd ever seen. I wasn't allowed to try on any dresses I liked and was put in there 2 'big dresses' (which were about size 18's). They proclaimed in front of the whole shop, 'my dear, you have big bones, even if you lose 4 stone you will never be smaller than a 16'. I cried (eveyone thought it was cos I liked the dress - LOL!!). That was in August 2007 and actually proved to be the kick up the arse I required.

I tried on dresses when I was on Cambridge at a different shop where the women were total godsends. they were like Gok Wan. I fell in love with a dress that cost £1200, way more than I could afford, so (hangs head in shame) I bought my dress off the internet from a stockist in USA.

The dress took a very long time to come, and lead to all manner of stress as it got 'lost' by parcelforce at customs in Coventry (I was an emotional wreck by that point), but it arrived just in time. I was very worried it would be too small but it actually needed taking in.

I worked very hard at the gym and ate carefully up till the wedding after finishing Cambridge and although I look a bit chubby in some of the pics I was thrilled with how I felt.

My biggest bit of advice is ask around and find a freindly shop. If they are a good wedding shop they will be able to tell what shape you are (and thus what will suit you) as I ended up falling for something I wouldn't have given a second glance. Wear good underwear when you try dresses on - hold 'em in pants and a decent bra. If you like them, go for a corset back as this gives for so much variation on the eventual size - it can vary a dress by 2 sizes I think. And finally, to avoid a near-nervous breakdown like I had, order in plenty of time!! I cannot stress the last point enough!!

This was me in August 2007 (sorry not full length but REFUSED to have them taken then):

And this was on the day: 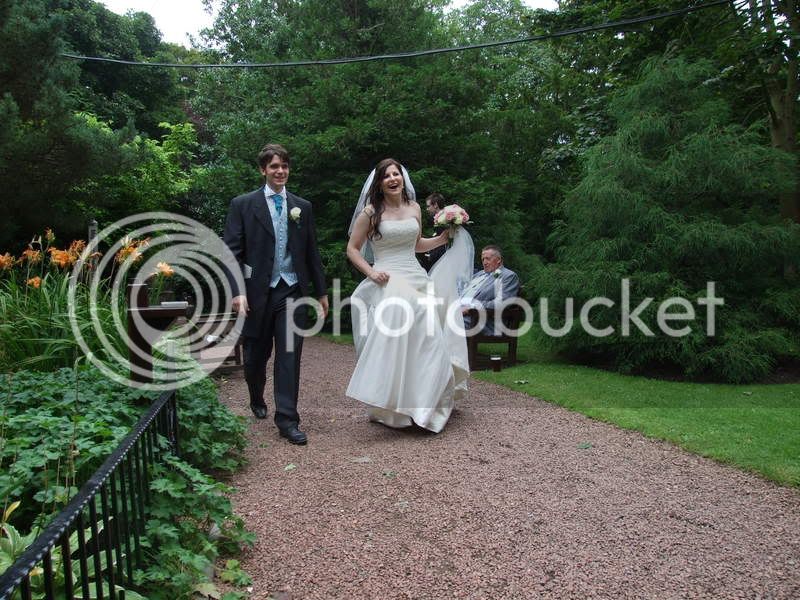 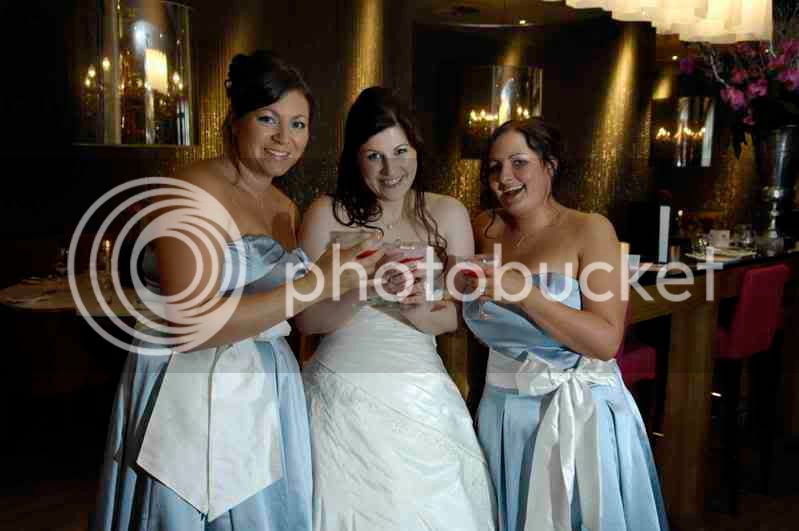 Apologies if these end up being huuuge!!
P

If you need advice from a former bridezilla let me know.

and your dress is gorgeous

Do you think I am leaving it too late to start shopping for a dress in 2 months time (6 months to go until wedding)? I should hopefully have lost approx 2 stone by then.. I am currently a big size 18 (tall) and am wanting to be a nice size 12

I also want to add that I am on day 4 of CD SS and am quite shocked at how easy I'm finding it (could just be the determination of feeling fab walking down the aisle and the fact that I am excited about the thought of losing weight!) Did you get some low points on CD and if so when and how did you deal with them?
[url=http://www.TickerFactory.com/weight-loss/wPc5fX7/]

S: 14st0lb C: 14st0lb G: 12st12lb BMI: 34.7 Loss: 0st0lb(0%)
Lisa - I have just sent you an email but forgot to say that when I ordered my dress, they ordered it on my current measurements knowing I was losing weight and said taking it in will be fine... as long as you leave them enough time to complete the work
Start weight 14st
mini goal 12st 12
final goal ​10st

I feel the pressure, and it's spurring me on to keep on track 100%. I will not be a fat bridesmaid!

Im on my 2nd day of CD and im getting married in may. I would be happy to be your buddy.
Ill friend ya!

gonna make a couple of appointments soon to look for dresses
[url=http://www.TickerFactory.com/weight-loss/wPc5fX7/]

Getting Back on Track

Week 1 - wish me luck
You must log in or register to reply here.

Dreamingmaid's Stop Feeling Sorry For Yourself And Do Something About It Diary!