Diary of a saxman

S: 19st2lb C: 13st10lb G: 12st0lb BMI: 27.5 Loss: 5st6lb(28.36%)
Just wanted to share some though with ya on how I am getting on with Cambridge.
Week 1.
First week was no doubt the hardest the first 3 days having my water bottle at hand was a must each time I got a hunger twinge sup that water! On the final evening of day 3 I went into ketosis, I knew this as I was so week I could barely climb my stairs my body was shaking and I was unreliably hungry! But pushed throughout it and the next morning I felt so much better despite for the rest of my first week I felt week and drained of energy, I just told myself that this was my body adjusting to having to rely on it's own resources. Then finally week 1. Weigh in 11pm loss whoop!
Get Rid of this ad and join in on the conversation for free today! Tap here!

S: 19st2lb C: 13st10lb G: 12st0lb BMI: 27.5 Loss: 5st6lb(28.36%)
Week 3.
This week has been strange, I feel as if my sense of smell has increased to that of a cats! I can smell every thing and it all smells soooo good! Had a few moments where I wanted to give in and eat but held strong and made it, few things I noticed in this week if I didn't drink enough water I would get bad head aches and every now and again I would get a gas build up in my stomach that made me burp and it would always taste of acid! So more water to quench the fire but despite this I felt good still energetic and weigh in recorded a weight loss of 4lbs.

S: 19st2lb C: 13st10lb G: 12st0lb BMI: 27.5 Loss: 5st6lb(28.36%)
Week 4.
Am into week 4 now not 4 days to go before my weigh in, and just wanted to note how tired I have been this week my job hours don't help by I just seem to be sleeping longer and even then once getting up feeling tired and lethargic for the rest of the day, hope this is just a phase, one thing I have noticed is that my the bottom of my ribs where they meet the diaphragm hurts when I laugh, but can start to see the improvement in my body already, without getting to detailed my wings on my stomach at my sides have nearly gone my moobs are shrinking my legs are getting tight and thinner my stomach is getting smaller my ribs are more visible when I lay flat and the wife sez my butts shrinking lol. Will keep ya posted on my weight loss for this week on Monday until then saxman out.

Saxman said:
Week 3.
This week has been strange, I feel as if my sense of smell has increased to that of a cats! I can smell every thing and it all smells soooo good! Had a few moments where I wanted to give in and eat but held strong and made it, few things I noticed in this week if I didn't drink enough water I would get bad head aches and every now and again I would get a gas build up in my stomach that made me burp and it would always taste of acid! So more water to quench the fire but despite this I felt good still energetic and weigh in recorded a weight loss of 4lbs.
Click to expand...

I too went through the heightened sense of smell. I also talked about it in my diary but I don't find the food smells pleasant, but it is my indicator of ketosis so bring it on.
Thanks for sharing your thoughts with us. It helps me on my journey if I can relate to others going through the same thing.

I will tend to my body
my mind and
my heart.

In search of me

Raising money for Save the Children, if anyone would like to sponsor me - virginmoneygiving.com/shereebennett

wow, how impressive. really loved reading your diary and its really inspired me. good luck and keep posting.
Started CD in Jan 2010 after baby and now back to get to goal.

The final countdown:20lbs to goal!

Dr Seuss:
'....you’re off to Great Places! Today is your day! Your mountain is waiting. So…get on your way'

they are small sponge cakes filled with a thick cream and they are VERY sweet.
i tried to avoid having any but i wasn't strong enough and ended up having 3 , then on Saturday at work i had forgotten to take my Bar with me... and working in a cinema is not a good place when hungry... i was working "the floor" which means cleaning up after the films have finished. and let me tell you we find lots of nice edible treats. i ended up eating quite a few Skittles and Cadburys Twirl Bites, but to make up for my Weakness i have been hitting the gym pretty hard this week.
i have come to the realisation that a bar, tetra, shake or porridge, are roughly 150 -170 calories. so when i go to the Gym i set the machines not for distance or time. but for 200 calorie burn. so if u think about it. 1 Cambridge bar = 25 mins of calorie burn in the gym.
and with this method in mind i would have my porridge and go to the gym burn 400-600 calories and then have a bar. once u have burnt through the first 200 calories your body doesn't have any more food-fuel left to burn so it turns to its stores.
so i may not be in ketosis but still have managed to loose 3 lbs because of this method. i am going to get back into Ketosis and then continue this method and hopefully see a much bigger loss next week

S: 19st2lb C: 13st10lb G: 12st0lb BMI: 27.5 Loss: 5st6lb(28.36%)
Week 17
well this week i've been trying a experiment.
as i go on holiday on the 28th i decided to do a week of SS+ but deliberately keeping myself out of ketosis to see how my body reacted, i did this by having a few slices of bread every 2 days, and at my weigh in i was still able to loose 3 lbs, now this week i am moving onto step 3 in preparation for the larger intake of food for while i am away, so far so good.

Week one, day one.
Jan22nd 2019
Diet going well drinking plenty, peeing plenty time for sleep..
Day 2 woke up with the worst headache sticking to diet.
Day 3 been enjoying the new smoothies for breakfast and tried the Mac n cheese today, it was ... ok... nothing to shout about.

So I have been on diet for 4 solid days now.. it’s Saturday morning I know I am off to a Brazilian steak house tonight as it was pre-booked for my birthday. Anyway I weight myself, the scales showed 21.01 a loss of 11lbs in 4 days nice!
The first week to be honest was not as bad as I remember it being, although I have been occupying my mind with a PS4 game, bought myself a 2.2L water bottle from the range so I can make sure I am getting my fluid intake. Last night was nice I have no doubt it took me out of ketosis, I tried to stay away from the carbs and have straight protein, although I did have a few carbs but not many I did have plenty of meat pure protein, but oh well will continue the diet and gonna start hitting my gym again this week.
Monday is here time to weigh in...21.02 put on 1lb from Saturday but a total of 10lbs loss.
Although the shock of going in and out of ketosis has meant I have spent allot of time on the toilet, but am keeping at it.
Week 2 nearly done tomorrow is weighing day hoping for a good loss. This week has been tough mentally been craving all sorts to things that I know I can’t have like pizza Donna-calzone fried chicken and my home made rice bowls. But kept strong kept chugging down my water bottle, been enjoying my evening meals although almost got to the point of clock watching waiting for it to strike 5 so I could start making my meal. 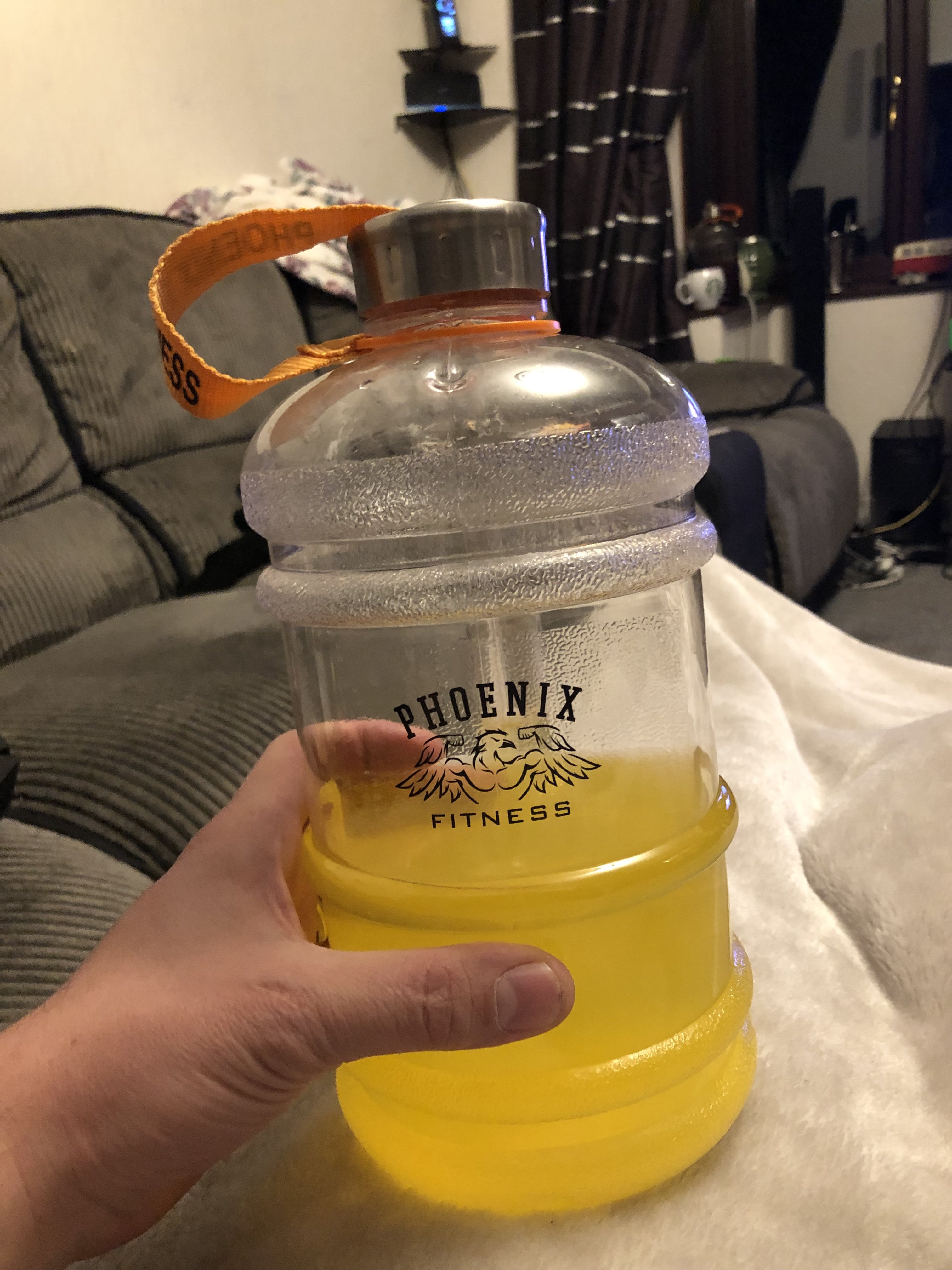 The Range are selling these bottles 2.2L handy to keep a measure of your daily intake.

I saw on another thread you have lost a stone!

S: 21st12lb C: 16st9lb G: 12st0.0lb Loss: 5st3lb(23.86%)
I never said what the meals were...
So from top left grilled turkey breast with pepper and curry spice. Next was tuna. Then it was 4% turkey mince formed into burgers, next is smoked basa fish, then normal basa fish, next is oven cooked 4% pork loins, and finally is pre cooked and sliced chicken.
You must log in or register to reply here.