I'm intrigued... have you seen these pedicures going about? The tanks with hundreds of little fish in them, you stick your feet in and the fish get rid of the dead skin.....!!

I'm really tempted to give this a go!
I saw it on an episode of Come Dine with Me, and now they are popping up all over the place, there's at least 3 places that do it in Aberdeen anyway...

Has anyone given it a go?
Any thoughts, or reviews??


Get Rid of this ad and join in on the conversation for free today! Tap here!
Jen.x

I bought my sis a voucher for one for her Christmas. She's not been yet though. I was going to get a voucher so I could go with but have really tickly feet so decided against it lol

S: 16st11lb C: 16st11lb G: 12st0lb Loss: 0st0lb(0%)
I saw a couple of people have it done in a local shopping centre. 1 said it was really good but the other didn't look overly impressed as the fish weren't touching her feet lol! I do quite fancy it but dunno if its worth the money!
Start Weight 16st 11
1st Goal to lose 11lb by my holiday end of September
J

I would say you have to at least give it a go, it's an experience if nothing else!

Haha, I knoow.... I was thinking of going to the place near Debenhams, its glass fronted but at least you're not on the street!

A couple of weeks after I wrote this, all the scare stories came out, I still ain't done it yet... lol
Jen.x

S: 16st13lb C: 16st3lb G: 9st4lb BMI: 39 Loss: 0st10lb(4.22%)
I went and got my hands and feet done. It did do something. Seemed like a layer was gone or something. I heard the lady running it tell someone else that if you do it regularly like all your dry skins on the heel should go.

Hands too?? Never seen that, I think that would freak me out....

Next time there's a groupon discount, Im going for it!!
Jen.x

S: 26st9.0lb C: 25st5.0lb G: 12st0.0lb Loss: 1st4lb(4.83%)
I tried it a few weeks ago was brilliant! I was scared to put my feet in the water bug once in got used to the feeling quickly - it was just a bit tickly! Would definitely recommend it really worked I saw a noticeable difference x
One step at a time to goal not matter how long it takes


Losing weight is hard, being big is harder.​

It kind of feels like you have pins and needles in your feet for about 5minutes afterwards.

To be honest with you, it was a very enjoyable and relaxing experience, but it didn't do much for the dry skin on my feet. I think for the actual garra ruffa fish pedicure to work, you need to have at least a few 20 min sessions per week, although it depends on the severity of your dry skin.

If you do have it done then enjoy!! xx

S: 14st9lb C: 13st6.3lb G: 8st9.3lb BMI: 31.4 Loss: 1st2.7lb(8.15%)
I've always been intrigued by the Garuffa Fish pedicure treatment and was desperate to have a go myself with so many Groupon/Wahanda vouchers and things going around last summer. But then I read this and it put me right off!!: (whether its true or not debatable but rather not risk it)

[h=2]HEPATITIS C FROM FISH TANK TREATMENTS[/h]Last month the government’s Health Protection Agency warned that fashionable fish pedicures, where tiny Garra Rufa fish nibble away hard skin, could spread potentially deadly diseases.
If a customer already infected with a blood-borne virus such as HIV or hepatitis bleeds into the water in the tank, then there is a very small chance the virus could be passed to another client, either via the fish or contaminated tank water.
To reduce risks, no one with open cuts should be treated and those with psoriasis or diabetes should avoid fish pedicures altogether.

Read more: How a trip to the beauty salon could poison you | Mail Online

[h=1]Fears fish foot spa pedicures could spread HIV and hepatitis C[/h]Fish foot spa pedicures could spread diseases such as HIV and hepatitis C, health experts have warned.
The government’s Health Protection Agency said those with diabetes, psoriasis or a weak immune system are particularly vulnerable and should not take part in the beauty craze at all.

In new guidance to be published today, they said the risk of infection for users of the increasingly popular treatment, in which dozens of tiny fish nibble dead skin from customers' feet, is ‘low but could not be completely excluded’. 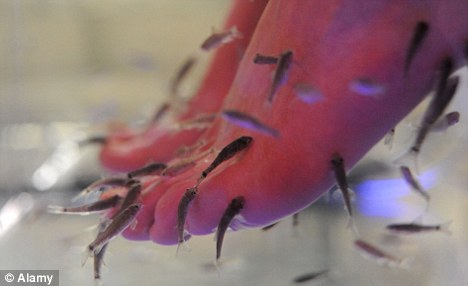 Health warning: There are fears fish pedicures could spread HIV and hepatitis C, the Health Protection Agency have warned

The agency says fish tank water contains micro-organisms and believes problems could arise from bacteria being transmitted by the pedicure’s garra rufa fish, from the spa water itself or from one customer to another if the water is not changed.
If a user is infected with a blood-borne virus like HIV or hepatitis and bleeds in the water, there is a risk the diseases could be passed on.
According to the agency’s guidance, the risk is ‘extremely low’ but it ‘cannot be completely excluded’.
An agency spokesman said: ‘We have issued this guidance because there are a growing number of these spas.
‘When the correct hygiene procedures are followed, the risk of infection is very low.
‘However, there is still a risk of transmission of a number of infections — this does include viruses like HIV and hepatitis.’

The HPA has recommended that spa water is changed after each client.

The equipment cannot be conventionally sterilised because the process could harm the fish, of which there are about 200 in every tank.
The pedicures - which have long been popular in Asia where the fad began - have been banned in some U.S. states, including Florida, Texas, New Hampshire and Washington, due to fears that infections could spread through open wounds.
The trend, which is meant to leave clients with smooth and attractive feet, has spread to beauty salons across the country and there are now around 280 fish spas in the UK.

A spokeswoman for HIV charity the Terrence Higgins Trust said: ‘The risk of picking up infections is minimal but people must be careful where they choose to go.’

Now on a mission to grow my hair back!!

They've closed them all down up here, ages ago now
Never bothered with it in the end..!
Jen.x

Auburn said:
They've closed them all down up here, ages ago now
Never bothered with it in the end..!
Click to expand...