WTH is going wrong with my chicken/turkey soup??

It's a Ramsay recipe from the BBC website using up Xmas leftovers and, well, it's just vile. But it isn't just this recipe! Every time I've had a go at something turkey or chicken based it just ends up awful. This made 6 portions and to make it less bearable I had to add Ras el Hanout and it's still, well, pretty rank.

So, are there any soup afficianado's or just bloody good cooks who can point out where I'm going wrong?? I've got two leftover turkey legs and I'd rather not end up with this again Is there a magic trick??
Get Rid of this ad and join in on the conversation for free today! Tap here!
Don't dig your grave with your own knife and fork!!

Method
Put the turkey meat in a saucepan, cover in chicken stock, keep the rest of the stock, and cook until the meat falls apart, remove and allow to cool, then shred the meat, set to one side.
Cut the sausage open and remove the meat, roll into small sausages and wrap with a small piece of the bacon (makes 8 pigs in blankets 0.5 syn per person) cook in the oven with the stuffing balls, for about 20 mins until cooked & browned.

Lightly fry the rough chopped onions, & cloves in a large soup pan. Add the stock, dried sage and peeled roughly chopped potatoes. Peel and chop the carrots & parsnip into small pieces, Leave to simmer for 25 mins until the vegetables are soft then blitz with the hand blender to make a rustic soup base. Season with Worcester Sauce, salt and pepper.

Add the turkey and peas to the soup base & simmer for 20 minutes. Plate up & place the stuffing balls & pigs in blankets on the top of the soup. 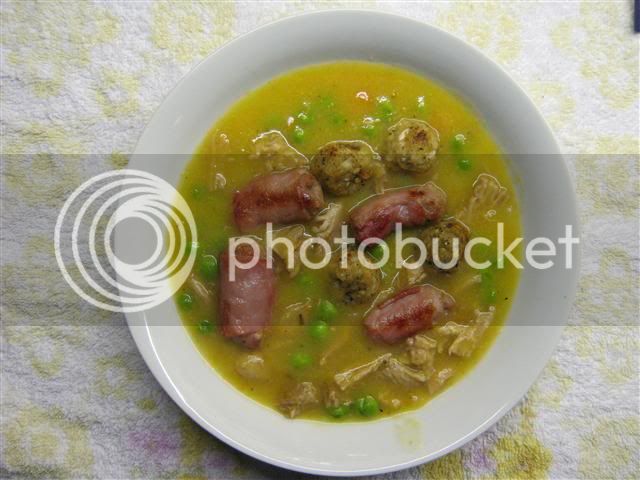 JezVonSavage said:
Maybe salt and pepper are where I'm going wrong?? i don't tend to put salt or pepper in anything- maybe it really is that simple!! Your's sounds lovely, might have a go throwing some noodles in too
Click to expand...

Salt & pepper are generally needed (in varying amounts) in all recipes, they bring a recipe together unless your using herbs.
Had a SW round the world trip and gained ??? (Not sure as dont want to get weighed but gone up a clothing size so must be bad)
But as of 31st Dec im on it!
Going to get weighed once a month & take my measurements and see how they change rather than the scales.

Slimbysummer: I very rarely use salt, even the tiniest dash of it and food tastes like sea water to me, but I do use a lot of herbs normally. The recipe I followed wasn't too herb heavy though, i'll add a bit of s&p to the frozen portions i've got.
Don't dig your grave with your own knife and fork!!

S: 27st8.5lb C: 17st3lb G: 16st7.5lb BMI: 36.6 Loss: 10st5.5lb(37.65%)
Agree about the seasoning, it can be horribly, horribly bland without plenty of it.
Also how do you cook it? Presumably you're sweating the veg a bit first? Dont forget to brown the chicken before putting it in, Im sure you know all this already.
Herbwise Id say bay leaves and sage sounds a bit minimal, try chucking plenty of fresh thyme sprigs in or just plenty of dried mixed herbs if thats all you've got. Good stock's important too, plenty of it! (one OXO cube wont cut it! and I cant say Id find ras el hanout a good match for turkey & veg myself... )

The other thing is they almost always taste far, far better the day after or even longer when the flavours have had chance to come out and mingle so its good if you can make a big batch and save the rest for another day/s.

At the end of the day personally I find turkey one of the blandest things on the planet so it probably not your cooking skills at fault
*The author of the above takes no responsibility for the interpretation of any content therein as anything other than non-too-serious jovial t'interweb chitchat. All content to be perused at the reader's own risk and to include substantial showering of appropriate smileys and quite possibly a large shovel of salt.

Would you believe the Ras El Hanout didn't add any flavour whatsoever, just gave it a bit of a kick. I've added salt & pepper to todays portion and it is a bit easier on the palette. Still not looking forward to eating the other frozen portions
Don't dig your grave with your own knife and fork!!

Be creative with your flavours.
If it's not got much flavour of its own, it will definitely need salt, but sometimes you can correct that with something a bit more adventurous. Cinnamon? Nutmeg? More herbs?

Did you blend the chicken in with your soup? Bcus apparently it wrecks the chicken if you blend it? Well according to John Torode on masterchef it does lol x

Place turkey legs in large stock pot and cover with water. Simmer turkey legs with the lid on the pot for about an hour. Check your turkey by trying to pick it up out of the pot with a fork. If the meat is falling off the bone, you're good to go. If not, simmer a bit longer until desired result is achieved.

Once turkey is tender, remove from pot and place on a cutting board or large plate to cool. Set turkey water (stock) aside. Once cooked, pick the turkey legs apart with your fingers. Remove the fat and other icky bits and reserve the meat in a separate dish or simply throw it back into your stock that you have set aside. It's a messy job, but worth it in the end! Go ahead and throw away your icky bits unless you plan on roasting those bones to make another turkey stock later.

In a separate pan or stock pot, saute diced onions, carrots, celery, minced garlic and any other root vegetables you like in one tablespoon of extra virgin olive oil. I like to mince my veg up until it's very fine. However, if you like a chunkier soup just dice them as you normally would. Once they have sweated out a bit and/or the onions are becoming transparent, sprinkle with pepper and stir in a good tablespoon of chicken bovril. This will add great flavor and will most likely omit the need for added salt later on.

Combine your stock and turkey bits that you have set aside with the sauteed veg and let simmer for at least 30 minutes. Taste your concoction at this point. If it is too salty for you, add a bit of water. If it's not salty enough, add a little more chicken bovril (not salt). When you are ready, add your starch (noodles/potatoes/rice) and cook until tender. Make sure you time this part appropriately or you will have mush in your soup! You may want to take your soup off the heat for the last two minutes or so of cooking time. The starch will continue to cook after you turn off the burner!

My advice is to always remember that less is more. You don't want to complicate the flavor of your soup with too many ingredients. And as you may have noticed, I VERY RARELY add salt to my soup. Using chicken bovril or something equivalent will give your soup more flavor, as well as adding a salt element.

That's my take on things! I'm a fat American. I know food, so you can trust me! lol Best of luck to you lovie!
Let's be good to ourselves.​
:grouphugg:​
You must log in or register to reply here.

G
Why have I gained in my first week?

Trying to lose weight on a VLCD - starting my journey

Attack Going back to my old favourite - Dukan.