Well, after meeting with some fab miniminers the other week and being so impressed with their positive attitude and obvious success (you know who you are), I finally decided to start attending WW meetings.

I found that there was one a mile away on Tuesday evenings so walked along to the venue... only to find that it was the wrong day! Should have gone on Monday. I had been so anxious on the way there too. Worrying about how much I now weighed, so scared to stand on my own scales at home. What a let-down. And it was raining too.

Chatting to a colleague at work the next day, she mentioned that her sister did meetings too and I should come along to the next one, on Thursday. OK, I said, I'll come. The venue was four miles away, so not really walkable most of the time, but had the added advantage of being near a supermarket so I can combine meetings and shopping (healthier stuff, of course).

After seeing Jen's Eat Out book in Glasgow, I bought one for myself, and also a Shop book. Me and the kids had a look at it later and Jamie, my son (not a pick on him) was shocked to discover exactly how many points was contained in a Wild West Sharer from Wetherspoons (his favourite) - 53 and a half.

"Well, you're supposed to share it with someone else" I pointed out. "Not likely" he replied.

Jayne, my daughter, regularly goes to Pizza Hut with friends and they always get those Stuffed Crust pizzas. One slice is 5 points. "But I like to have three slices" she complained.

I saw that the chicken and bacon salad I usually have at Wetherspoons is actually 11 and a half points. that's a lot for a salad.

I will spend a bit of time later planning tomorrow's menu for the day. Starting with porridge.

I have calculated that I qualify for 26 points. Seems quite a lot. However, I must try eat all of them, I know.

AJ
Get Rid of this ad and join in on the conversation for free today! Tap here!

S: 19st2lb C: 19st2lb G: 13st0lb BMI: 42 Loss: 0st0lb(0%)
wahey! welcome to WW AJ! you'll love it.. and dont worry about those points - you will be wishing for more in no time! Will give you a PM with my numbers should you need to text for anything.. cant guarantee a reply until i get a decent contract though, but the thought is there all the same!

and yes, you would think so many of the things in Wetherspoons would be good for you, but they have hidden lard in there somewhere! Wetherspoons is good if you try a Core week (they wont explain this at class but we can explain to you on here) because you can have a steak and a jacket potato (no butter) with salad (no dressing) and not have to worry about pointing it

Great to see you here AmandaJayne

hope you're having a good day though and enjoyed your porridge! (shreddies all the way for me though! )
Weight and Goals:

You will do great!

You will do great!

Starlightarty0049: Welcome to the gang AJ
little-rotund-onewelcome Amanda Jayne and good luck with your weight loss


Thank you all for your positive vibes! Much appreciated.


I didn't manage to 'spend' all my points yesterday (first day) because I didn't feel like eating the toasted cinnamon and raisin bagel (3.5 points) which I'd reserved for supper. This on top of the fact that I had underspent already by five points that day.

Still, it's early days and I'll soon get into a routine. It definitely helps to have the Eat Out book and the Shop book handy.

My first day tracker is full of scribbled out notes because I kept changing my mind.

Planning only works if I don't keep changing my mind. I'd better use a pencil, perhaps...
A

glad to hear your day went well though AJ that bagel sounds rather nice.. though I am more of a poppy seed / savoury bagel person myself
Weight and Goals:

S: 16st6lb C: 16st6lb G: 10st7lb BMI: 36 Loss: 0st0lb(0%)
Hello!! Good luck with WW honey! Glad youre getting there.At the start I was always under my points, one day I only had 13!! (I was on 26 too) lol!! I think its a mentality thing, I couldnt get my head round the fact that I was on a diet yet forcing myself to eat a snickers!! lol!!!
Unfortunately, now it appears to be the opposite and I can struggle to save a couple of points for weekend Chinese!! lol!!
Hope youre having a fabulous day!
J
Back on the wagon!

Anna_B said:
Good luck! A pencil sounds like a good idea I use a tracker, I chose my 3 meals but leave points for snacks so I have some flexibility during the day depending on what I feel like. Or I set aside so many points for my evening meal & chose then what I feel like as I too change my mind often
Click to expand...

That sounds like a good routine, Anna. For the first couple of weeks it'll be trial and error until I get used to the new regime. I have a house full of pencils, just got to locate them all.

I can see from your tracker that you've been making great progress. Do you reckon you'll get the rest off this year?

blackwidow said:
i have to say i do better when i plan, but often I do 'wing' it which is rather bad of me! I have a whsmith notebook as my tracker, and its full of scribbling out too.. and i am ashamed to say a few days that I havent tracked on have "BAD DAY " written in big letters on them..

glad to hear your day went well though AJ that bagel sounds rather nice.. though I am more of a poppy seed / savoury bagel person myself
Click to expand...


I found a notebook last night, Rach. I have written down my shipping list for today, plus the food I'm planning to eat, for a few days. I'll probably re-write it in my official tracker later in the week. So it stays neat and tidy, and the leader can actually read it, if required.

I got a pack of Ryvita Sunflower crackers and Pumpkin crackers. They are one point each and will do nicely with low fat cream cheese for a snack. I also got a pack of WW bagels - 2 points each. I'll try the toasted with cream cheese too.

"...and i am ashamed to say a few days that I havent tracked on have "BAD DAY " written in big letters on them..."

That's normal isn't it? If we didn't have BAD DAYS we wouldn't know what a GOOD DAY was!

havent seen those bagels yet but you're not the only one to mention so will keep an eye for them!
Weight and Goals:

smilerjen said:
Hello!! Good luck with WW honey! Glad youre getting there.At the start I was always under my points, one day I only had 13!! (I was on 26 too) lol!! I think its a mentality thing, I couldnt get my head round the fact that I was on a diet yet forcing myself to eat a snickers!! lol!!!
Unfortunately, now it appears to be the opposite and I can struggle to save a couple of points for weekend Chinese!! lol!!
Hope youre having a fabulous day!
J
Click to expand...


I think you make a really good point Jen. I have come to realise that this in fact is not a diet at all. It is just a way of monitoring calories in and calories out.

What should happen at the 'end' when we finally achieve our 'goal' is that we become Gold Members and get to attend meetings when we want, for free. I reckon that I'll definitely have to do this if I want to remain at goal. Otherwise I will gradually revert 'back' to 'normal' eating and put it all back on. Again.

Today has been a great second day!

Up early to do some housewifey type stuff. Breakfast was porridge with a sprinkling of candarel on top.

Walked into town and ate a couple of plums and a kiwi on the way.

Weather blooming awful though and driving wind and some rain meant that my hair needed serious attention once I got to town. 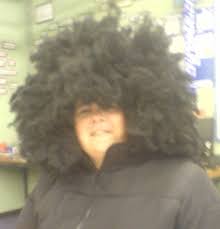 I met the rest of the family at Wetherspoons and had chicken caesar salad for lunch. Mmmm. I had carried forward four points from yesterday so it meant that I had a total of 30 for the day. After lunch I had 14 left. Still loads to spend on tea and supper.

Looked everywhere for a Wii Fit (Christmas pressie from hubby) - none to be had for love nor money. Will check online later. Bought hubby a new suit for his pressie. We left it until now because it was too hectic to think about before Christmas.

S: 19st2lb C: 19st2lb G: 13st0lb BMI: 42 Loss: 0st0lb(0%)
if you ask in Game, they usually will tell you when the next delivery will be coming in.. then if you can get in for around 10am-ish you should be able to get hold of one if not, if you ask in the supermarkets they usually have a waiting list you can pop your name on
Weight and Goals:

Glad to see you back and sounding positive.

Good luck on WW. I think you'll do just fine - it'll fit in with family life so easily.

So you went to Spoons for lunch then? I thought you hated Spoons and never went there :8855:

http://www.raceforlifesponsorme.org/premier-girls
​
You must log in or register to reply here.